Eid al-Fitr is one of the most important religious holidays in the Islamic calendar. It is a time where families and friends get together and celebrate the end of the month of Ramadan with extravagant plates of food, lots of drinks and celebrations. Traditionally, Muslims break their fast like the prophet Muhammad did – with dates and water. After this, anything can be eaten; however different regions around the world have their own traditions. Understanding what Muslims around the world eat at Eid al-Fitr might give you a couple of ideas for what you want to celebrate with.

With a lot of influence from the Spanish and the French, the food from this region is full of flavour as well as quintessential Arabic food. One thing that is incredibly popular to eat Eid al-Fitr is cous cous. This dish contains steamed balls of semolina and can be accompanied with any vegetables and meat you like.

You can also have it with a traditional North African tagine with prunes and meat to get a full depth of flavour from the different spices. However, if you wanted something a bit lighter, then some lovely tomato soup known as al-Harira will be perfect, especially with some chickpeas, noodles and some lamb.

Taking care of our sweet tooth is relatively easy as well, as North African cakes are incredibly sweet. Almond cookies known as ghribas are incredibly light, delicate and they hit the spot perfectly. You can have these with some patisseries and some traditional mint tea to wash it all down with! 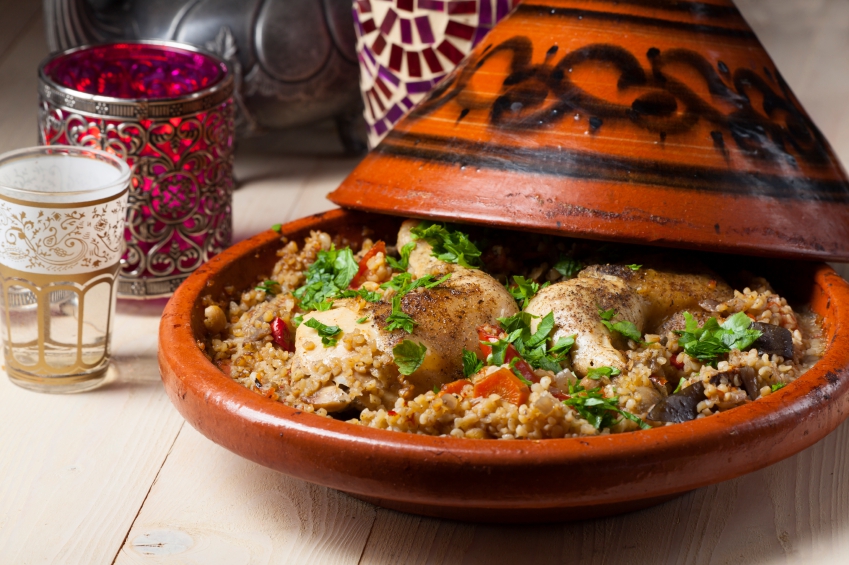 A lot of Middle-Eastern cuisine is focussed around meat, grains and confectionaries. So, if you want something sweet to kick things off, there’s nothing quite like atayef. These little pancakes are great, as they can be filled with nuts and then served with sugary syrup. You can also have some sweet dumplings with it known as luqaimat. These are fantastic as they are small, crunchy and they have just the right amount of sweetness.

If you wanted a savoury dish that is very filling, harees is a very good contender. It consists of coarsely-ground wheat and is traditionally served with meat. You could also have a baked fish dish known as masgouf with it to add a bit of variety to your meal.

However, if you want an extravagant centrepiece that is similar to the North African cous cous, then mansaf is the dish for you! It is the national dish of Jordan and can also be found in the surrounding countries. It consists of lamb cooked in a sauce of yoghurt and served with either rice or bulgur wheat and it is the perfect dish for you, your family and friends to get stuck into!

traditional Jordanian and Palestinian dish.made of lamb cooked in a sauce of fermented dried yogurt and served with rice

Asian cuisine is world renowned for its aromatic flavours and it doesn’t stop when it comes to Eid al-Fitr. Samosas are a great way to start the festivities, as they are light and subtle in flavour. Accompaniments like saag and aloo gobi are also great for everyone to have a bit of.

When it comes to the main dish, one great contender has to be a biryani. This traditionally Indian rice dish has so much flavour and due to the abundance of rice in Asia, you’ll never run out of it! However, if you are from Southeast Asia, like Indonesia and the Philippines, the main dish of choice at the end of Ramadan has to be rendang. This is a spicy meat dish that can be served with anything, but flavoursome rice really compliments the spicy flavours from the meat.

At Hajj and Umra Express, we take the upmost respect and care in putting together our Umrah packages during the month of Ramadan as well as our Hajj packages. If you would like to learn more about the services that we offer, then please get in touch! We will be more than happy to help with your enquiry.